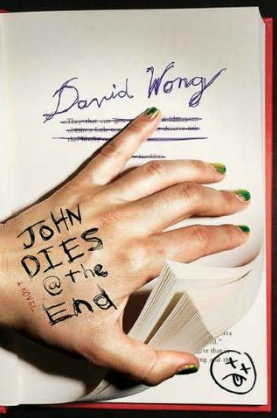 Do you think John might make it out alive?
Announcer: Will Clark Kent find happiness with a new love? Stay tuned for chapter six — Clark Kent Finds Happiness!
Cinema Snob: Whoa, spoiler alert, movie!
— The Cinema Snob (on the Made-for-TV Movie version of the Superman musical), The Cinema Snob
Advertisement:

Work and episode titles that give away what happens in the story.

This trope only applies if the title really is a spoiler. An important event — like a character's death — could be revealed by the title (and even take place near the show's end) but not have been meant as a surprise, so the title's not an example of this trope. See Foregone Conclusion or Oh, and X Dies for those. Quick litmus test: if the work was a paperback novel, the back would ask a question. Would the title answer it? Oh, and X Dies builds up tension whether we have a Lying Creator or Teasing Creator or not. If the creator is NOT lying or teasing, it's this trope.

If the title is shown in the opening of the episode, may be a Spoiler Opening. If the title is shown on the DVD cover for Season 2 and it's a casual giveaway of the shocking twist at the end of Season 1, you're looking at a Late-Arrival Spoiler. Many examples of an Excited Title! Two-Part Episode Name! may also be this. If the title says everything important about what happens and how, then it is also Exactly What It Says on the Tin, but just revealing that someone dies or is introduced usually isn't enough. If it spoils the existence of something, rather than a plot point, then it's The Namesake. Some works hide the spoiler by closing on title (or not displaying it at all) instead of opening with it. Chapter titles in the "In Which a Trope Is Described" style often can end up as these.

Note that this can apply to episode titles that are never displayed on-screen during the episode, as it can be difficult to avoid seeing them in TV guides and on DVD packaging. Although possibly some creators figure that if the episode's been aired at least once, the audience should already be aware of it.