The World Is Just Awesome 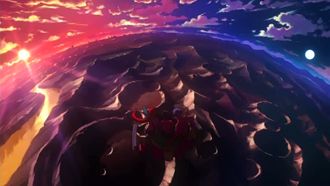 Be sure to use appropriate music.

"I've... seen things you people wouldn't believe. Attack ships on fire off the shoulder of Orion. I've watched C-beams glitter in the dark by the Tannhäuser Gate. All those... moments... will be lost in time. Like tears in rain."
— Roy Batty, Blade Runner
Advertisement:

When characters look out on the horizon, to marvel at the universe in all its glory; from towering mountaintops above thick, ancient forests, with great beasts flying overhead, to sprawling metropoli, teeming with thousands or millions of thriving souls, a testament to the accomplishments of man. Then, in that moment, both the cast and the audience are reminded that, if nothing else, the world itself is just... awesome.

Examples usually, though not always, involve being in the air, as this allows for the whole world to be shown. Or, you know, large parts of it. The characters will all be in awe, and the music will be either super-upbeat, serene and full of reverb, or not there at all. Expect the art work to suddenly take itself more seriously than usual.

By looking at the characters’ expressions, you can tell that even they are impressed, so think how you should feel sitting there, watching/reading/playing this on your boring old earth. Expect comments like, "Amazing!" "Awesome!" "I can't believe it!" Also expect some lesser-awesome things to happen in the distance, like a sea serpent jumping out of the ocean, or a pack of dragon-wolves flying in the distance, or maybe a volcano erupting. In fact, all of the above will usually happen at the exact same time to make the world even more awesome. That, however, is mostly an introductory bonus, as the rest of the world will become "dull and boring" as the cast is Walking the Earth. All of these slightly-awesome happenings will happen only on and off at most and at specific moments.

This can happen at any point of the series, though usually at the beginning as a hook for the audience. If used at the beginning, it's usually done to show that the cast is moving away from their normal life. If used somewhere in the middle of the series, it's usually done to show how far they have come, in which case the characters will probably get a I Can See My House from Here moment. If used at the end, it might either be used for the previous example, or to show how the entire world has changed. Almost always, this will lead to the characters suddenly realizing that they're about to fall, thus ending the beautiful moment.

For fantasy films with a romantic subplot, this is the moment when a boy takes a girl who's indifferent to him into a mindblowing experience flying with the world's wonders in full view and realizing to her wonder what the boy can do. By the time they come in for a landing, the girl usually needs no more convincing that she is not letting this terrific guy go.

Sometimes, the camera is simply showing off the world ahead of you. This trope only works if the character would otherwise be amazed at the brave new world he has stepped into. If the character(s) is(are) otherwise not amazed, as the world would seem pretty boring to them, this trope doesn't work, though this usually happens at the very, very beginning since the setting has yet to be described.

Sometimes these moments happen during gameplay where you do something extra-awesome for the very first time. See also That's No Moon! though that usually consists of fear, and The Ruins I Caused for when characters are looking down at something that's been destroyed. They Should Have Sent A Poet is an alternate name for this trope, and describes a common reaction to such an experience.

The Trope Namer is the Discovery Channel, which occasionally uses the titular phrase as a tagline.

Suika And The Sunflower Field

After learning that Suika is near-sighted and wanting to do a test run of making Glass, Senku creates Glass Lenses for Suikas' Watermelon Mask and takes her to a Sunflower Field.

Alternative Title(s): They Should Have Sent A Poet

Suika And The Sunflower Field

After learning that Suika is near-sighted and wanting to do a test run of making Glass, Senku creates Glass Lenses for Suikas' Watermelon Mask and takes her to a Sunflower Field.