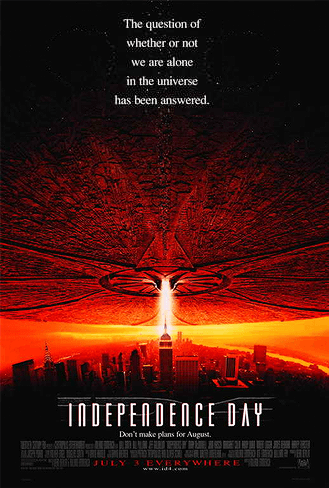 Welcome to Earth.
"On July 2nd, they arrive.
On July 3rd, they attack.
On July 4th, we fight back."
Advertisement:

Independence Day is a 1996 movie by Roland Emmerich, known in its promotional material as ID4. At its core, it is an archetypical Summer Blockbuster, boasting an All-Star Cast of familiar character types, Stuff Blowing Up, fighter jets dogfighting alien craft, Rousing Speeches, Area 51, and an otherwise fairly by-the-book Alien Invasion premise with overt influence from well-known sources like The War of the Worlds.

On a beautiful July day in 1996, a New Mexico-based organization searching for extraterrestrial life detects a strange signal coming in, a possible sign of alien life and an exciting discovery — until they find out it's coming from the Moon.

Unknown to them, a ship 1/4 the Moon's size arrives in orbit and deploys 36 city-sized saucers that settle over major cities worldwide. What at first is apprehension at the confirmation of alien life turns to horror as they begin firing their Wave Motion Guns to wipe out entire cities with a single shot.

Hell-bent on wiping humanity out and taking Earth for themselves, the vicious alien race turns a normal July day into a desperate fight for survival, with U.S. Marine pilot Steven Hiller (Will Smith), President Thomas Whitmore (Bill Pullman) and computer programmer David Levinson (Jeff Goldblum) pulling together a plan to save the human race.

A sequel entitled Independence Day: Resurgence was released on June 24, 2016. Almost all of the main cast, including Bill Pullman and Jeff Goldblum returned to reprise their roles,

but Will Smith did not.

The film also spawned two tie-in novels: Independence Day: Silent Zone, which is about Okun's work to study their technology before the invasion, and Independence Day: War in the Desert, which follows the RAF pilots seen in the film as they battle alien survivors in the Middle East. In anticipation of the sequel, both books were re-released, along with the original novelization, as part of the Independence Day Omnibus, which is available as an eBook.