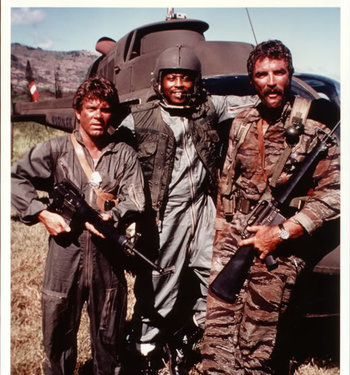 Being an old army buddy is a good way to know a pilot.
Advertisement:

In times of disaster, when immediate escape is necessary, or the hero is in need of transportation to confront the evil causing the mayhem, it is invaluable that he has, some time over the course of his past adventures, met and befriended a pilot. Sometimes they just find one on the fly, but a regular may also step up to do the job. In these cases, the regular may be with the group partially because he knows how to fly, but it's also possible that it's never come up before.

The pilot's capability level varies, although he's usually not completely incompetent. He may be an ace pilot, or he may have just had a few lessons, but either way his services are called upon and, sometimes reluctantly, he accepts the challenge.

Of course, this is not going to be easy. Any number of things may occur to complicate the aviator's foray into heroism, from mechanical difficulties to running out of gas to enemy fire. In some cases, the pilot will die in the process, going down with his plane. In lighter cases, he may turn out to have ejected or have survived the crash....thus allowing the hero to enlist his services the next time he needs air transport.

Unrelated to the original "test episodes" of television series.

Later, Gibson presses Travolta into service again, turning the plane around so he can go back & find Homer, the one person who didn't like the film.
Travolta: Ahh, but you promised to help me move!