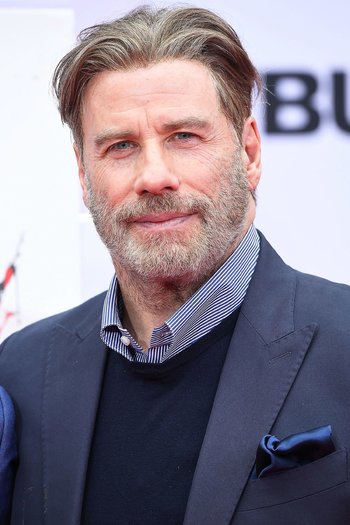 "The good and wonderful thing about my whole career is that I've always felt that the audience, if I do it well, will track wherever I go, whether it's President or a lawyer or bad guy or good. All I have to do is execute the material enough where they buy into it. I've had the great luxury of the audiences accepting that."
Advertisement:

John Joseph Travolta (born February 18, 1954) is an American actor, dancer and singer whose career has had more lives than a cat.

Travolta has twice been nominated for the Academy Award for Best Actor. The first, for his role in Saturday Night Fever and the second for Pulp Fiction. He won the Golden Globe Award for Best Actor - Motion Picture Musical or Comedy for his performance in Get Shorty.

After attending Dwight Morrow High School, Travolta moved across the Hudson River to New York City and landed a role in the touring company of the musical Grease and on Broadway in Over Here! singing the Sherman Brothers' song "Dream Drummin'". He then moved to Los Angeles to further his career in show business.

Travolta played a messenger on the CBS soap opera The Edge of Night. He also appeared on another CBS serial The Secret Storm. Travolta's first California-filmed television role was as a fall victim in an Emergency! episode, in September 1972, but his first significant movie role was as Billy Nolan, a bully who was goaded into playing a prank on Sissy Spacek's character in the horror film Carrie (1976). Around the same time, he landed his star-making role as "Vinnie Barbarino" in the TV sitcom Welcome Back, Kotter (1975-1979), in which his sister, Ellen, also occasionally appeared (as Arnold Horshack's mother). In the next few years, he appeared in some of his most memorable screen roles: Tony Manero in Saturday Night Fever (1977) and as Danny Zuko in Grease (1978). These two films were among the most commercially successful pictures of the decade and catapulted Travolta to international stardom. Saturday Night Fever earned him an Academy Award nomination for Best Actor. After Urban Cowboy came a string of flops that sidelined his acting career. It was not until he played Vincent Vega in Quentin Tarantino's hit Pulp Fiction (1994), for which he received an Academy Award nomination, that his film career was briefly revived before fizzling again in the 2000s and he began appearing in poorly received direct-to-video films with the occasional indie project where he reminds audiences that he has range as an actor. He earned critical acclaim, however, upon returning to television with American Crime Story, earning Emmy and Golden Globe nominations for his portrayal of Robert Shapiro and winning an Emmy as the series' producer.

He has the distinction of another actor having built his entire career on taking projects he'd turned down, as Richard Gere only got the three roles that put him on the map in Days of Heaven, American Gigolo, and An Officer and a Gentleman after Travolta passed on them all.

Rumors that he may be gay, or at least bi, have circulated for years. He endured serial male sexual harassment scandals in 2012, but they fizzled when the accusers recanted. More information on that on Wikipedia.

You know what they call a film credit in Paris? "Le Film Credits":