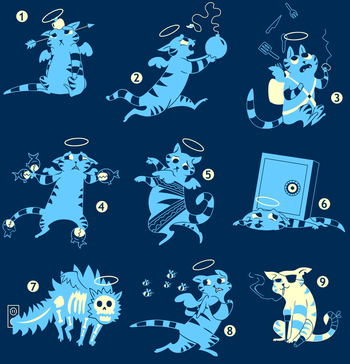 The many deaths of Lucky the Cat.
Image

. Used with permission.
"A Cat in despondency sighed
And resolved to commit suicide
She passed under the wheels
Of eight automobiles
And under the ninth one she died"

That cats have nine lives is an old wives' tale referring to cats' uncanny survival skills. The number of lives for a cat depends though. While in most countries the cat is said to have nine lives, in Arab and Turkish proverbs poor puss has a mere seven lucky lives (something that was then inherited by countries that were invaded by Muslims at some point, like Spain) and in Russia, is said to survive nine deaths (ergo, ten lives).

Why cats are often depicted having nine lives can be explained by the fact that during the ancient times, the number nine was considered a mystical and lucky number, the sum total of the "trinity of trinities", also being due to their associations with magic and their tendency to survive considerable falls—due to what's called a "righting reflex"—and their noted agility seen when they dodge death. In popular culture, though, the expression is used more literally. In many, many cartoons this gets visualised by also showing nine souls flying around (with their corresponding number written on them) making cats souls look more special by being part of a united entity. Cats will often be seen dying many spectacular deaths until only one life remains.

Related to Cats Are Magic.