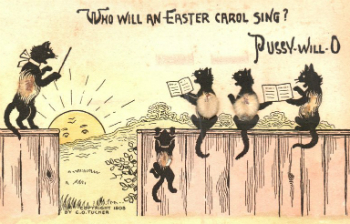 "I came back from vacation and she had somehow... changed. She had gone into heat while I was away... Four thousand male cats are in my front yard reenacting West Side Story. To-NIIIIGHT, to-NIIIIIGHT, won't be just any night..."
— Amy Boyd
Advertisement:

Alleycats invariably spend their evenings singing opera while standing on top of a wooden fence or a roof-top. Usually they perform solos, although coordinated choruses and sodden barbershop renditions of "How Dry I Am" are not unknown. A female cat (complete with a ribbon or bow) may or may not be seen nearby, the coy recipient of the serenade.

The cat is likely to be treated as a Dreadful Musician, since feline yowling is considered Cute, but Cacophonic, and corresponds to really bad human singing. Of course, for Rule of Funny points, the concert is just as likely to be sophisticated Opera or Jazz. Performances usually end with a thrown shoe or piece of trash and a bellowed "shaddup" from somewhere off screen.

For what it's worth, midnight yowling from Real Life alley cats generally means they're fighting or mating, not "entertaining".

Compare That Poor Cat. The Trope Namer is the Tom and Jerry cartoon The Cat Concerto— which isn't an example, since the cat in it isn't singing but playing classical piano. Completely unrelated to Tail Concerto, which is a videogame.

The gang discovers that Sunspot and Cody were performing in a pet choir with the stray cats, howling "Ode to Joy".

The gang discovers that Sunspot and Cody were performing in a pet choir with the stray cats, howling "Ode to Joy".