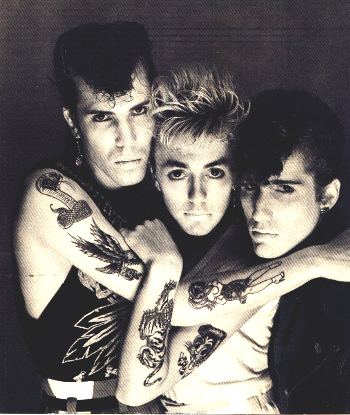 The band that brought Rockabilly back to the pop world. Stray Cats are a power trio formed in the late ‘70s by guitarist Brian Setzer, stand up bassist Lee Rocker, and drummer Slim Jim Phantom. All three went to – or didn’t go to, as the case often was – school together in Massapequa, New York. Hanging around CBGB’s and Max’s Kansas City introduced them to both Eddie Cochran and the punk scene, big influences on their work.

They played the small places and amassed an impressive following, but had a hard time breaking through. Their style of stripped-down rock music was considered too weird in New York because it was neither Hard Rock nor Punk. They’d heard the scene in London was more diverse...and in the summer of 1980, they scraped together enough money to fly there. The tickets were one-way, so success was the only option. After sleeping in parks and on floors for a few months, they started getting gigs as an opening act.

With their gravity-defying hair, thrift store cat clothes, and flashy showmanship, the Stray Cats couldn’t help getting noticed. Soon, they were being wined and dined by The Rolling Stones. Every record label in England wanted to sign them. They accepted a deal that would see their albums released everywhere but the United States and got to work.

The rest is history. The band saw incredible success in England – so much so that people in other countries were surprised the Stray Cats were American. The US warmed up eventually, though it took a few years. Their showmanship, with Slim Jim Phantom standing at the front of the stage pounding his kit; Lee Rocker spinning and climbing on his bass; and Brian Setzer crooning his way through the songs like a tattooed Paul McCartney, ensured they became an MTV mainstay.

The Cats went their separate ways in the 90s, but get back together for a tour once in a while. Brian Setzer is the best-known Stray Cat by a long shot, perhaps due to his orchestra.