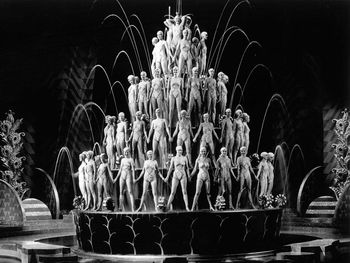 Who can resist a Busby Berkeley Number?
Advertisement:

Yet another 1933 Warner Bros. musical featuring songs by Harry Warren and Al Dubin, though this time the songs were divided between them and Sammy Fain and Irving Kahal.

James Cagney stars as Chester Kent, a musical theater director whose career is greatly threatened by the invention of talking motion pictures. Kent, casting about for a means of saving his job, hits on the idea of creating live musical numbers to be shown as "prologues" to main features in movie theaters. Joan Blondell co-stars as his long-suffering secretary Nan Prescott, with Ruby Keeler and Dick Powell as two of his cast members.

Frankly, this Excuse Plot serves no other purpose than to give a Busby Berkeley Number montage some substance.

Footlight Parade was directed by Lloyd Bacon, with Busby Berkeley directing the giant musical numbers. The movie that Kent's partners take him to see is a real film, The Telegraph Trail, starring an obscure B-movie actor named John Wayne.