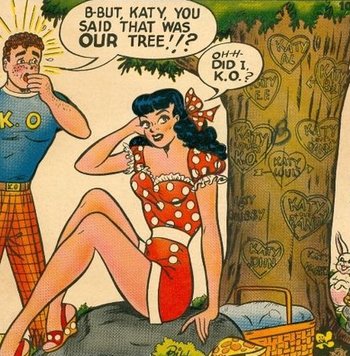 Well, she can't choose just one pair of shoes, so how can she choose one boyfriend?
Peggy: I need you to get me a list of all the women that Howard has entertained in the last year.
Jarvis: I don't think there's enough ink in the whole of New York to complete that request.
Peggy: Fine. Just in the last six months, then. Is that possible?
Jarvis: Oh yes. Yes, I suggest we start with the Western hemisphere.
Peggy: Oh, please.
— Agent Carter
Advertisement:

A character who is well known for how easy they are. For sexual contact, that is. This trope is a Double Standard writ large: when a male character sluts it up, he's a stud and usually The Casanova, Kavorka Man, Chivalrous Pervert, a Chick Magnet and The Pornomancer or maybe an Accidental Pornomancer if they are innocent and aren't actively seeking it out. When a woman does it, she's a slut and it's time for the most insulting and aggressive adjectives, with "Really Gets Around" as a euphemism. But if she's a Dude Magnet and/or The Pornomancer, then she's a studette

Anything That Moves is a subtrope, and one of the few cases where a male character will typically be portrayed badly for it. An Ethical Slut is a specific, more modern subtrope which isn't portrayed negatively. Extreme Omnisexual is related, for characters that are more than bisexuals. See also Everybody Has Lots of Sex for cases where this Trope more-or-less applies to the entire cast of a work. If everyone believes this about a character, but they're never seen doing anything of the sort (or it's mostly exaggerated), that's Urban Legend Love Life.

In Real Life, this is always a subjective topic with lots of Double Standard issues. In the words of couple’s therapist Esther Perel, "Even under the cloak of anonymity, gender stereotypes persist. Men are socialized to boast, exaggerate, and overrepresent their sexual exploits, while women minimize, deny, and underrepresent theirs." What is true for regular people also goes for politicians, Hollywood actors and actresses, models, rock stars, sports stars and other media celebrities. Power and wealth eroticize, so they will attract more groupies and lusting fans. On the other hand their reputations are often exaggerated in the popular press or by themselves. The celebrities will be depicted as Bigger Is Better in Bed or as sexual supermen/women with tabloid articles and tell-all biographies informing us of their being in open marriages/relationships, having threesomes and participating in orgies while some of them are in reality not that well endowed or that exceptionally great in bed. Not only that, but some of these same stars and starlets have actually paid for sex. Similarly most of them are too preoccupied with their jobs, family, traveling and other important stuff to be bed hopping every night. Many rock stars are too exhausted after a concert to immediately get it on with their groupies and many male sports stars abstain from sex before competitions, for instance.

Even though this trope is Truth in Television for many very attractive men and women, most of the time both the number of previous sex partners and the amount of sex they have are grossly exaggerated. If you believe some people, they have sex with a different sex partner every night of the week and not only that: it's always a satisfying experience. As the old saying goes: Money and sex are the topics people lie about the most. The only people who, without a doubt, undeniably really get around in Real Life are prostitutes and porn stars and starlets. Has nothing to do with I Get Around.

"The Outrageous Okona" has a male version
Captain Thadiun Okona. Although he is only a one shot character, appearing only in this episode, having sex with tons of women crewmembers is pretty much what he does through most of the episode (it is also implied he does Counselor Troi).