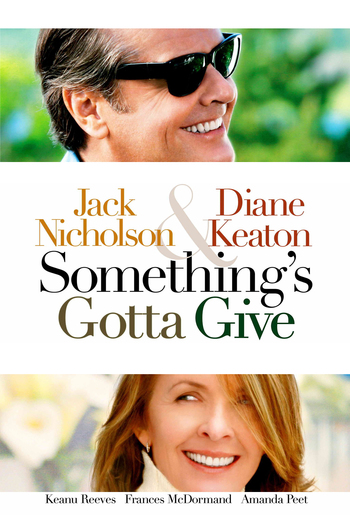 "Erica, you are a woman to love."
— Harry Sanborn
Advertisement:

Something's Gotta Give is a 2003 romantic comedy movie written and directed by Nancy Meyers, and starring Jack Nicholson and Diane Keaton. It was distributed by Columbia Pictures in North America and Warner Bros. Pictures internationally.

Nicholson plays Harry Sanborn, an aged music industry exec with a fondness for younger women like Marin, his latest trophy girlfriend. Things get a little awkward when Harry suffers a heart attack at the home of Marin's playwright mother Erica, played by Keaton. Left in the care of Erica and his young doctor Julian, played by Keanu Reeves, a love triangle starts to take shape between the three.

Not to be confused with Something's Got to Give, the 1962 unfinished film starring Marilyn Monroe.