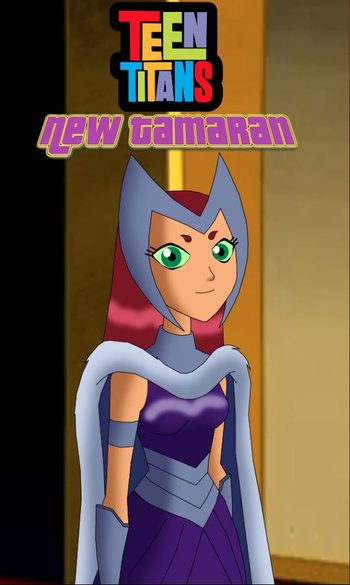 is a fanfic by Saberlord_Oboeshoes acting as a sixth season to Teen Titans (2003). The story is mostly centered on Starfire, who is looking forward to a normal adulthood with her boyfriend/fiance Robin.

But that all changes when her home planet Tamaran is destroyed, and what's left of her people need a new home and a new leader. With the encouragement of her friends and fiance, Starfire helps her people turn Earth's moon into New Tamaran, and Robin/Nightwing hopes their marriage will form a peaceful alliance between them and humanity.

However, the evil that destroyed Tamaran has come to Earth, and it won't stop until it has destroyed everything Starfire loves.

This story is 45 chapters long and features a good amount of non-Titans DC characters - Supergirl, Wonder Girl, Oracle, The Scarecrow, Lex Luthor, Steve Trevor (who is President of the United States), Dr. Michael Holt, and The Spectre.

There is also a sequel, Justice Returns

, which wraps up loose ends and sets the stage for a new generation of young heroes and villains.

The author has also written some side-stories/prequels as well:

- One Bad Day After

, a sequel to The Killing Joke

- A Brief History of Superheroics by Lois Lane

: the author's alternative take on the history of the DC Universe

: Supergirl and Raven have a chat

: Lex Luthor makes a deal with the Big Bad

- As Long As I Believe In Us

: A love story between Wonder Girl and Kyle Rayner.

In addition, the author has expanded on the backstory of some of the characters:- Raven

New Tamaran, Justice Returns, and their side-stories contain examples of: