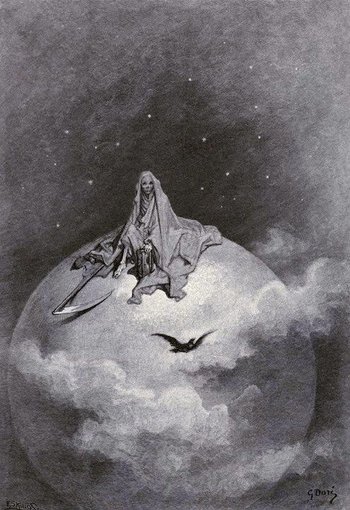 "The Raven" is a narrative poem of the Gothic horror genre published in 1845. Oft parodied and referenced, it is the most famous work by author Edgar Allan Poe, and to this day is one of the most well-known pieces of English poetry ever written.

It tells the tale of an unidentified narrator who is mourning the loss of his love, Lenore, when he is interrupted by the tapping of a raven whose constant (yet strangely fitting) repetition of the word "Nevermore" increasingly aggravates him to the point of madness.

you can listen to it in the voice of Christopher Lee (two separate readings). And here's

one by John de Lancie. There's also one

by Tay Zonday. Here's another

by Vincent Price. And here's

one by James Earl Jones (here

it is without music, and another

is yet another, this time by Stan Lee. And still another, by Basil Rathbone here

The Alan Parsons Project based a song on the poem, as did Queen. Gustave Doré illustrated it too. Another one, purely instrumental, was done by Nox Arcana.

Amusingly parodied in the poem: ''The End of the Raven'' by Poe's Cat

. The Simpsons also did

an Animated Adaptation of it for its first Treehouse of Horror episode, narrated by James Earl Jones. While it still has the show's typical humor, as well as snarky commentary from Bart & Lisa, it's a surprisingly straight and faithful version.