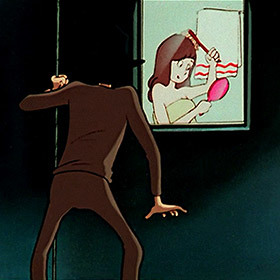 "When I was a girl I'd sneak in the boys' locker room
Hide deep inside, it was my little creep stalker room
As they disrobed I was oogling and ogling
Little did they know that for me they were modelling!"
— The Lonely Island feat. Nicki Minaj, "The Creep"
Advertisement:

The Peeping Tom is a character who gets his kicks from non-consensual voyeurism — spying on others in explicit situations without their permission or knowledge. Peeping Toms are often driven by a fetishistic urge, deriving pleasure not just from the act of spying itself, but from the thrill of the potential for getting caught. This is, unfortunately, a case of Truth in Television, as acts of peeping are reported in all cultures around the world, their goal made easier each year as Technology Marches On.

The methods of peeping can vary from work to work, from the classic depiction of a pervert peering through windows to watch people changing clothes, to Naughty Birdwatching through the use of telescopes or binoculars, to the tech-savvy voyeur who sets up hidden cameras in bathroom stalls. While these characters are commonly male, a female Peeping Tom (or "Peeping Tammy", if you will) is plausible. Characters who focus their attention on only the subject of their unrequited affection may be both The Peeping Tom and a Stalker with a Crush.

If the one being watched knows there's a peeper looking but doesn't care, that's a Shameless Fanservice Girl. In some cases, they might be The Tease and give the peeper an even bigger show than they expected.

In more dramatic stories, it is rare for a Peeping Tom character to be shown in a sympathetic light. In works where this trope is played for laughs, however, a Chivalrous Pervert may show some Peeping Tom tendencies.

A subtrope of Girl Watching. Sometimes overlaps with Outdoor Bath Peeping in cases where the spying is intentional. An innocent character who is wrongfully accused of being a Peeping Tom is instead an Accidental Pervert. Compare Window Watcher, which is more about peeping because one is nosy about others' business. See "No Peeking!" Request for when someone asks for this not to occur.

If the movie about this kind of character is what you're looking for, click here.

The name for this trope comes from the misinterpretation of the Lady Godiva legend. According to said legend, when the lady rode naked through the city (to protest the taxes imposed by her husband), the townsfolk politely shut their windows to avoid seeing her. Later, a painting was created to memorize the legend, featuring a single man looking at the lady, supposed to be her shocked husband. However, people assumed that this was a shamelessly peeking townsman and labeled him "Peeping Tom"; some time later, the legend actually gained this detail about one man who dared look at his lady and went blind in result.