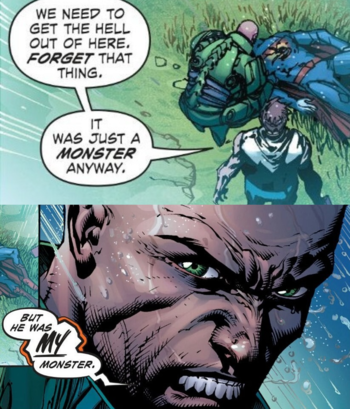 He was his monster, indeed.
Jesse Pinkman: You wanna... you wanna know what he did? You wanna hear about it?
Hank Schrader: Jesse, put out the lighter.
Jesse: He poisoned a little kid. An 8-year-old boy. Just because, you know... just as a move!
Hank: Walt's a bastard. Secret's out. We'll talk about it. But I need you to put out the lighter, okay? Look, Jesse... Jesse, I don't wanna kill you. And you don't wanna be killed. So put it out.
Jesse: [tearing up] He can't keep getting away with it! [raising his voice angrily] He can't keep getting away with it!
— Breaking Bad, "Rabid Dog"
Advertisement:

Being angry and sad is normal, especially when one is going through a hard time. Sometimes someone may feel bitter about their expectations failing or depressed that they've lost something. Even if it's something that's bound to happen, it's never an easy thing to go through and it's a testimony of how hard life can be.

There is the chance that one can be angry and sad at the same time, and this is a feeling that happens often due to how both are spurred upon by similar events, actions, and failing expectations. And whenever these sorts of thoughts occur, one may feel inclined to take out their pent-in struggles and anger at someone, complaining for various reasons, including why things aren't going their way, why are they facing misfortune, and how they're going to miss out on something that they've either held dear or they've waited for a long time. Regardless of what it is, it's never a good feeling.

These sorts of outbursts are the result of someone having gone through enough sadness and anger up until the point where they can't take it anymore and they end up expressing it towards someone in a broken-down, frustrated and melancholic tone of voice and expressions. Shouting, slurring, and sobbing can also be accompanied by the griever if they're getting too emotional about something. Usually, the recipient of the outburst may try to comfort and/or sympathize with the complainer or they'll quietly listen to every word, though it takes a while before the atmosphere becomes quiet.

This is about outbursts that are directly aimed at someone whilst expressing a mix of depression and rage. Compare with Misdirected Outburst where a character expresses anger sporadically and randomly towards everyone around and Misplaced Retribution where a character takes to negatively target someone and going overboard with it. While distinctive, there is a chance for both of them to overlap for an emphasis on sadness.

Can also overlap with Anger Born of Worry and "The Reason You Suck" Speech, the former where one individual may become frustrated at someone whom they care about and end up becoming more angsty when thinking and confronted about it, and the latter where one snaps and tearfully explains how someone ruined their life and/or work in a bitter tone. May even overlap with Villainous Breakdown, Villainous BSoD, What the Hell, Hero?, Heroic BSoD, and Despair Event Horizon, provided the former two deal with a villain who has had emotional stakes and troubles throughout the narrative and if the third results in something catastrophic that the hero's friends or family might react with shock, dismay, and disappointment. May be preceded or followed by Big "NO!". Inelegant Blubbering and In-Universe Catharsis is also a common way of expression whenever an outburst is in play, though this isn't always the case. Overlaps with Berserker Tears, Rage-Breaking Point, and Angst Nuke are possible if there is a particular emphasis on a character's anger.

Batman VS The Arkham Knight

While battling against one another, Batman tries to reason with The Arkham Knight, who also happens to be his former protege, Jason Todd. However, Jason rebukes every statement with mixed shouts of anger, desperation, and sadness. By the end, he mournfully laments about Batman leaving him behind to die, which the latter deeply regrets.

Batman VS The Arkham Knight

While battling against one another, Batman tries to reason with The Arkham Knight, who also happens to be his former protege, Jason Todd. However, Jason rebukes every statement with mixed shouts of anger, desperation, and sadness. By the end, he mournfully laments about Batman leaving him behind to die, which the latter deeply regrets.