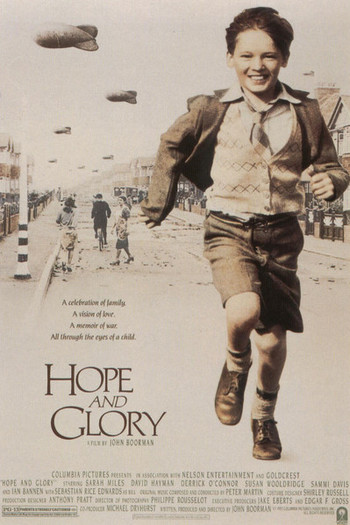 Hope and Glory is a 1987 film directed by John Boorman.

It is a nostalgic comedy set in a working-class suburb of London, taking place between 1939 and 1942. Billy Rohan is a schoolboy who is ten years old when World War II in the West begins in earnest with the German invasion of France. His father Clive, swept away in a tide of patriotic enthusiasm, joins up, despite being well into his forties and having already served in World War I. This leaves Billy's mother Grace alone at home, in charge of a family that includes Billy, his little sister Sue, and his rebellious teenaged sister Dawn.

Boorman followed the film in 2014 with Queen and Country, a loose sequel that follows Billy (now called Bill) through his Army training during The Korean War.