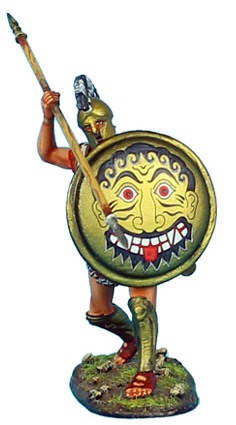 My shield says "Nyahhh!" to you, sir!
Advertisement:

One of the great things about shields are that depending on the design and size, this basically makes them large metal or wooden blank canvases were smiths or artists can have some fun.

While some are left blank* (especially if they were meant to be somewhat disposable), there are few that are given the bare essentials (like the colors of their faction as an example), but some are given amazing and intricate designs as a way to show off the smiths and artists skills but to also make it's wielders stand out. This trope covers a subset that choose their design to be based on faces/heads, from something humanoid or animalistic either used for intimidation or to denote their loyalties. It's usually something painted on by artists but smiths sometimes make the face/head a separate piece attached to the shield.

Although there's a few unorthodox examples of this trope, sometimes the shield with the face is the face (or head) of some strange being, but for a slightly more mundane example the shield is be designed to be based on a head or face of something, usually an animal of some sort.

No, this isn't about face masks. This trope can also be compared with Rage Helm.