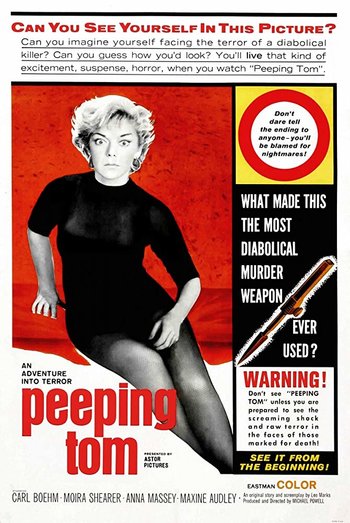 "Look out! You're being watched!"
Advertisement:

Peeping Tom is a 1960 British Psychological Thriller film by the legendary director Michael Powell. Along with Psycho, released the same year, it can be seen as a precursor to the Slasher Movie genre. It's also known for the controversy it generated at the time it was made.

Mark Lewis (Carl Boehm) is a very disturbed young man with a movie camera. An aspiring filmmaker, he works with a film crew and has a second job as a photographer of erotica. This all serves to feed his obsession with voyeurism and death, which he feeds by making his own private snuff films, killing women and filming their deaths. Mark also owns a boarding house, and after engaging in conversation with the family downstairs he strikes up a friendship with their daughter Helen (Anna Massey), eventually entering into a relationship with her. Mark shares some of his home movies with Helen, and opens up to her about the childhood problems created by his father. Turns out he used his son as his subject for an experiment in psychological fears, putting Mark in stressful situations and filming everything with his camera.

No one suspects clean-cut, mild-mannered Mark when a prostitute is found dead in his neighborhood, nor do they suspect him when a second victim is found dead on the set of the film he's working on. Finally a chance comment from a psychiatrist leads the police to suspect Mark. Unable to escape his urges, Mark murders his third victim in circumstances which make it obvious he's the killer. He flees back to his boarding house, only to find that Helen has looked at his films and knows the truth about him. She begs him to turn himself in, but instead he commits suicide, thus giving his documentary an appropriate ending.

The film was highly controversial. Before it was released, it was heavily edited by the British censors, with much of the nudity and violence cut out. It was also viciously panned by critics and a flop with audiences, and effectively wrecked Powell's career. Eventually it was Vindicated by History and now is esteemed as an early classic of the horror genre.