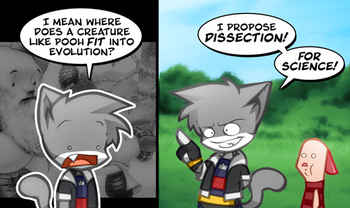 "Your scientists were so preoccupied with whether or not they could, they didn't stop to think if they should."
— Ian Malcolm, Jurassic Park
Advertisement:

This is one of the classic motivations for Science Is Bad stories. The researcher will seek forbidden knowledge for its own sake rather than to better the world, and with no thought of the consequences. Usually simple curiosity, coupled with ambition, will evolve into hubris before long, as caution and restraint are thrown out the steel-barred window.

When a scientist says he does something For Science!, what this usually means is he simply doesn't care about the answers to several important questions regarding his research, like:

Usually, this nonchalance leads to Reed Richards Is Useless as they file away their inventions under "Forgotten Phlebotinum" rather than seek to commercialize them or expanding the body of knowledge available to humanity. And that's with normal research. Contrary to Fridge Logic, For Science rarely provides additional insight in its field; after the Nuclear Roboclone is created, most Mad Scientists lose interest in documenting how they actually did it and what else can be done with those methods. Where test subjects are concerned, at their most benign they'll only threaten to do minor experiments on friends; if they get volunteers or luckily capture one, the effects will be quirky and temporary.

These benign inventors may end up in service of the Corrupt Corporate Executive, and will be so happy to have funding they don't ask where the money comes from — or what their discoveries are being used for. Expect them to go "You promised you would use my discoveries for good!" to his "Oh, but I am!".

It can also lead to Slowly Slipping Into Evil as an inventor slips into full blown, cackling mad science as sanity and ethics are deemed "irrelevant" or hindrances to their work. Other times, the answers they come up with to the above questions will lead them to a life of supervillainy as they get research funds by robbing banks, get test subjects by kidnapping, and out-and-out make things solely for destructive purposes... or because they can.

Villains who adhere to the above principles are often very good at depicting themselves as victims and their opponents as the true villains. For starters, many will claim that they have "progress" on their side — thus evoking "progressivism" as a kind of moral imperative and implying that anyone who would dare stand in their way is an arrogant, bigoted, barbaric and just plain mean knuckle-dragger who resents knowledge of any kind. The fact that scientists themselves can be pretty arrogant and brutal on occasion never occurs to such villains — or if it does, they don't care.

There is some truth to this — many scientists and especially mathematicians do what they do for the fun of it rather than more practical concerns — but that's little different from the rest of academia. Besides, basic research done to expand human knowledge without regard for practical applications is the sort of science that produces groundbreaking insights. Darwin studied evolution to understand life better, not because he wanted to advance the art of animal husbandry.

Remember, Science Is Bad, but... but... Just Think of the Potential!! Compare and contrast For Art! and For Cuisine!. I'll show them! I'll show them all! They'll see they were wrong to laugh at me! Battle Cry for the Mad Scientist, the Hollywood Atheist, the Morally Ambiguous Doctorate, Gadgeteer Genius and Science Hero.