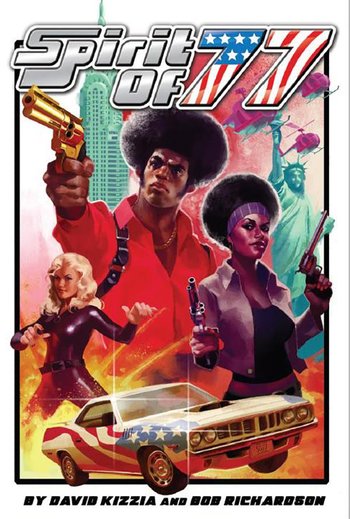 Spirit of '77 is a game from Monkeyfun Studios released in 2015 that uses the Powered by the Apocalypse Engine and is, in the creator's words, "the best parts of a bad decade" put into a roleplaying game. It contains many Shout-Outs to 1970's TV, film, and music, along with a healthy tip of the pimp hat to the Exploitation Film genre. A supplement book, Wide World of '77, contains three pre-made adventures and more details on the game setting.

Hey, cats! It's The '70s! 1977 to be specific, or at least an altered version where Richard Nixon beat the Watergate rap by throwing several of his own cronies under the bus. (The disappearance of a couple of pesky news reporters looking into the affair was probably just a coincidence.) He's served two full terms as president, though not without further controversy when he used zombies to end the Vietnam War. Now he's Secretary of State under newly elected president Gerald Ford, who easily won the 1976 election against a peanut farmer from Georgia.

In other news, mysterious X-Tech has revolutionized the world, but also has created frightening side effects that have caused the Cold War to heat up again. The Glam Movement, which may or may not be directly influenced by honest-to-God alien contact, is also becoming a major cultural influence, especially since music can now be channeled and used as a weapon.

And you? You can get down on the action by embracing an action-filled role to adapt to the crazy, super groovy world around you, calling on the tropes, roles, and stories frequently seen in Seventies' fads and pop culture. Can you dig it?

Each character consists of three modifiers, a "role" which describes your character's occupation or place in society, a "story" which describes their special abilities or how they get things done, and a "buzz" that provides your character's motivation. All three contribute skills, traits, and equipment to the complete character. You will also have a "hook" to other characters in your group that details why you'd hang around those weirdos in the first place.

Spirit of '77 contains examples of: