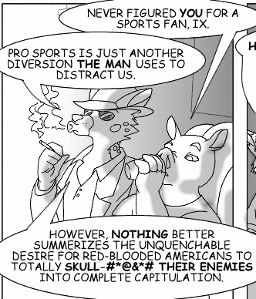 What is gonzo journalism? Well, take everything you know about traditional news coverage and twist it. Don't observe events; become a part of them. Are there multiple viewpoints? Forget all semblance of sober objectivity. Take a side, and argue fervently for it. If you want to, portray the other side(s) as the Worst Thing Ever and dismiss their arguments as emanating from a Propaganda Machine. Also, drugs. Lots of drugs, or at least booze.

What's the point of this? It isn't to give readers the dry facts of the matter; they can probably get that from a more traditional news source. It's more about getting the feel of the events or places you're covering. Which, by the way, leads us to another important element: you must be writing more or less as you experience your story. Editing is held to an absolute minimum. This not only ensures that the feel of the event is included, it also lets your voice shine through. The resulting mash is often disjointed and surreal, and is almost always quirky and generally odd. If you've succeeded, you've created an article or non-fiction novel worth reading as literature rather than as journalism, one that someone might read fifty years later and actually appreciate. If you've failed...well, let's hope you don't fail.

describes gonzo journalism as "a style of journalism that is written without claims of objectivity, often including the reporter as part of the story via a first-person narrative."

Gonzo journalism developed during the 1960s, spearheaded by outlaw journalist Hunter S. Thompson. Thompson wrote very stylized news stories told from the first person perspective (most news stories are written in third person) that were often sarcastic, vulgar and extremely negative of his opposition, including his personal arch-nemesis, U.S. President Richard Nixon. The Ur-Example, Trope Codifier, and Genre Launcher is Thompson's "The Kentucky Derby is Decadent and Depraved", published in the short-lived literary magazine Scanlan's Monthly in June 1970, documenting his trip to Louisville—his hometown—and the bizarre festival that is the Derby. The style was created entirely because Thompson was a Ridiculous Procrastinator who was up against his deadline and, lacking anything to show for his work other than his basic notes on the event, simply started ripping pages out of his notebook and sending them in. The magazine published his first-person notes from the Derby as-is, and thus Gonzo Journalism was born. Another Sixties pioneer of the genre was Tom Wolfe, who before becoming a satiric novelist penned acid-colored articles like "The Kandy-Kolored Tangerine-Flake Streamline Baby" and "Las Vegas (What?) Las Vegas (Can't hear you! Too noisy) Las Vegas!!!!"

Gonzo news articles are normally told similar to a fictional story format, with the writer acting as narrator of the story with a focus not only on people and events but also personal commentary on the history and morality of said subjects. The purpose of the story is to sway the reader to the writer's side by championing a person, group or outlook on life and ridiculing those opposed to such things. Usually the side being championed is portrayed as the underdog fighting against the status quo. Even stories that aren't attack pieces per se still treat mundane news events with irreverence and contempt.

Very obviously Writer on Board. Expect the writer to see themselves as an Intrepid Reporter whose duty is to pull back the curtain and expose The Masquerade. In fiction, the gonzo journalist can be a mouthpiece for La Résistance or a Jerk with a Heart of Gold, often both.