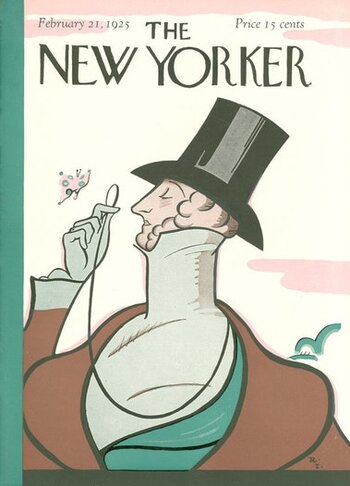 The New Yorker is a weekly literary, cultural, and news magazine published in New York City by print media giant Condé Nast. Since its debut on February 21, 1925, it has produced more than 4,000 issues. Its website features more expansive content, including videos, podcasts, and additional short news articles that did not get published in the print edition.

The magazine has gained a reputation for being both painfully highbrow (or high-middlebrow, at least) and politically liberal, and for devoting a significant portion of its contents to cultural and lifestyle explorations of New York and its environs. However, despite these characteristics it is read widely by non-New Yorkers, and is recognized throughout the United States as a kind of shorthand signifier of metropolitan and urbane sensibilities, similar to broadcasting's NPR and PBS.

It is also noted for its long nonfiction articles, such as John Hersey's 31,000-word piece on the atomic bombing of Hiroshima, which was published as the only article of the August 31, 1946 edition of the magazine.

In 2016 it spun off a television series called The New Yorker Presents, available via Amazon Prime and featuring a format not entirely unlike the magazine's, presenting short segments covering a variety of topics and using the magazine's iconic cartoons as intermissions.