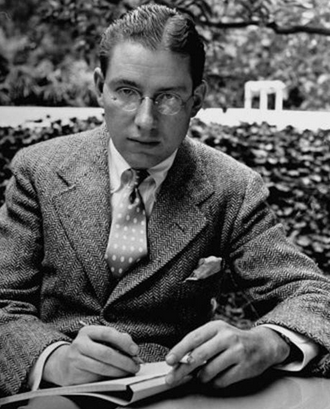 "Candy is dandy,
But Liquor Is Quicker."
Advertisement:

Frederic Ogden Nash (August 19, 1902 – May 19, 1971) was one of the great writers of American humorous poetry, noted for couplets or other poems that rhyme, but the lines are of different length and irregular meter. He lived in Baltimore most of his life, and included several paeans to it in his work. Also noted are his series of poems set to Camille Saint-Saëns' Carnival of the Animals.

He was also verified by the Guinness World Records as having composed the shortest published poem: "On the Antiquity of Fleas", which consists of the single line "Adam had 'em."

"And I know, unless someone has pilfered an installment to clean an ashtray with, that Yowler hasn't had a bite to eat in twenty years."