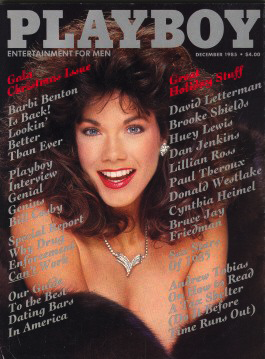 The most skin we can show here and still be safe for work.
Advertisement:

Playboy, the magazine synonymous with beautiful naked women, and 12-year-old boys getting caught reading them.

The magazine is known for its nude photos (including celebrity photos) and articles, creating a content paradox, as far as articles (most notably during its 1950s-1980s heyday) being a draw towards readers equal to the naked pictures of women (or so men say, when caught by wives and girlfriends). Sadly, though, those days are long gone, as the magazine mostly serves as a porno version of Maxim, which is ironic given that Maxim is essentially a swimsuit version of Playboy. It can be a little jarring to realize that in its heyday this magazine was credible enough to interview people like Jimmy Carter (in which Carter made his infamous "lust in my heart" comment) and Martin Luther King Jr.

The Playboy Bunny costume actually comes from clubs Playboy used to own, where their waitresses dressed up in those outfits.

Despite seeming like a Distaff Counterpart, the magazine Playgirl has no affiliation with Playboy.

Trope Namer for I Read It for the Articles. This was a legitimate justification as late as the 90s. Literary greats published in the magazine include Joseph Heller, Roald Dahl, Ian Fleming, Gabriel García Márquez, Margaret Atwood, John Updike, Haruki Murakami, Norman Mailer, and Ray Bradbury.

In March of 2020, Playboy announced

that it would shut down its magazine after years of declining sales. Their brand lives on throughout the world of adult entertainment.