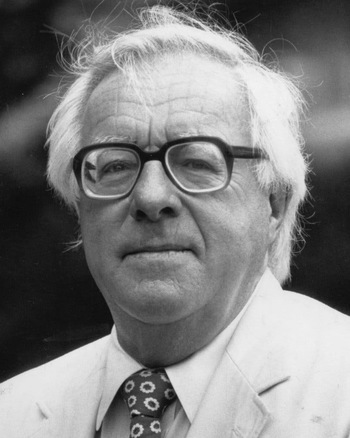 "Don't think. Thinking is the enemy of creativity. It's self-conscious, and anything self-conscious is lousy. You can't try to do things. You simply must do things."
Advertisement:

Raymond Douglas Bradbury (August 22, 1920 – June 5, 2012) was a highly acclaimed American author of Mystery, Horror, Speculative, and Literary Fiction. He was also known for his screenplays and poetry, and for organizing and editing a number of anthologies in the Science Fiction genre.

His best-known novel is probably the dystopian, Pre-Cyberpunk novel Fahrenheit 451. His most well known short story is probably "A Sound of Thunder", which gave the world the Butterfly of Doom. He Also Did the story for a Disney Theme Park ride at Epcot.

A number of his novels and short stories have been adapted to film and TV series. Back in the 1950s, he discovered that two of his stories had been adapted by EC Comics without permission. He kept his sense of humor about this, writing a note to the publisher praising the adaptations, while remarking that he had "inadvertently" not yet received the royalties. The publisher was eventually able to work something out with the author well enough to be able to print several fine authorized adaptations of his work.

Works by Ray Bradbury include:

Works that Ray Bradbury has contributed to: