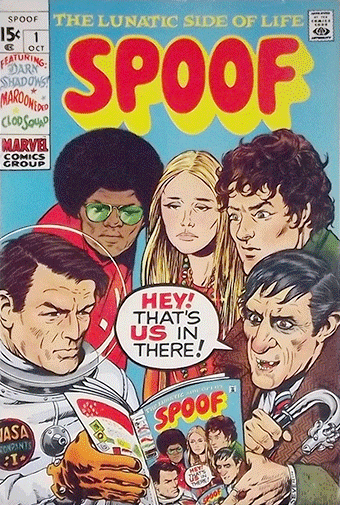 "I can see FOREVER!"
— Various people, upon seeing a droste image
Advertisement:

For instance, take this cover of Spoof which shows the characters holding a copy of that very comic, whose cover depicts them holding ... a copy of the very same comic (with the same cover). Theoretically, there could be infinite recursion of that comic book in the image, though it's safe to assume that the printer doesn't have enough resolution to reproduce them all. (It's the thought that counts!)note Actually, the Barnabas Collins parody is holding his hand in front of where the third repetition of the cover would be, but that's just nitpicking.

A similar effect can be set up in a Hall of Mirrors by standing between two mirrors facing each other only for real. Of course you have to turn slightly to see it so even then the effect has limits.

See also Nested Stories and Dream Within a Dream, which has the layering but not the self-similarity. Also see Recursive Reality which is this trope on a cosmic level.