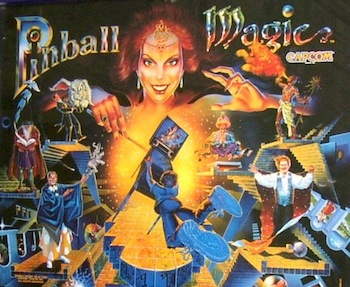 Pinball Magic is a 1995 arcade pinball game, the first table from Capcom's pinball division. It was designed by Bryan Hansen and Rob Hurtado, with art by Hugh Van Zanten and Jeff Busch.

In Pinball Magic, the player is an aspiring magician who must prove his skills before a group of seven famous mystics, all under the leadership of the mysterious Matra Magna. As she waves her wand over the playfield, impress the Masters by performing the linking rings, transforming beasts in the Morph Chamber, riding the magic carpet, escaping from a locked trunk, and numerous other acts. When it's time, take the Stage and Silence the Critics by levitating the pinball. If you manage to complete all three rounds of the magicians' trials, you might discover the secret of Matra Magna's eternal youth...

Pinball Magic is widely considered to be a respectable debut from Capcom, though pinball fans often get into heated arguments when comparing it to Theatre of Magic. Pinball Magic is widely agreed to be for expert players, as its linear gameplay requires precise shots to advance, and proceeding through all 21 tricks is a challenge for even the best players.