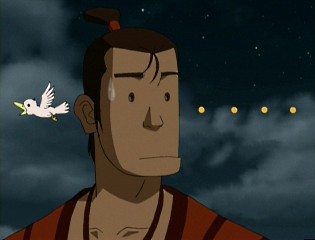 Azula has that effect on people.
"A full minute of stunned silence means 'My God what did you do?' not 'Please continue'."
— #540 of the Things Mr. Welch Is No Longer Allowed to Do in an RPG on the difference between amazement and horror
Advertisement:

Exactly What It Says on the Tin. Someone is shocked or stunned into silence.

There are two major types: Stunned amazement or stunned horror.

Often, stunned amazement causes the performer to think the audience's initial silence means they dislike the performance. The truth becomes apparent when they burst into applause. Often will lead to a Slow Clap. If in comedic fiction, bonus points if the sound of Chirping Crickets is the only audible thing.

Stunned horror can be further divided into stunned by stupidity, stunned by surreality, or stunned by realization of just how bad the situation is. The first two occur when a character says (or does) something so stupid or off the wall other characters are rendered unable to talk or limited to a single word, often a Flat "What". See also Chirping Crickets, Loudspeaker Truck, Face Fault, and Idiot Crows. The third, obviously, is a manifestation of Oh, Crap!, often a Mass "Oh, Crap!".

If the stunned character is known as a Deadpan Snarker, it becomes an example of Sarcasm Failure.

See also Deer in the Headlights when someone is stunned by immediate, personal danger, and Shutting Up Now for a possible follow up. If this happens during a radio broadcast, it can lead to Dead Air.