Sled Dogs Through the Snow 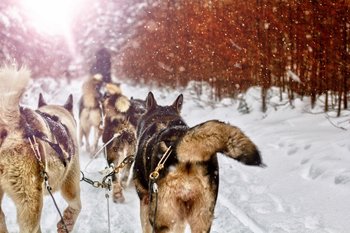 Dashing through the snow, on a twelve-dog open sled...
Advertisement:

Sled dogs have been used to transport people and supplies for more than a thousand years in northern regions. From Alaska to the Antarctic,note Antarctica would eventually be closed off to dogsledding in 1992, when all dogs were banned from the continent. This was due to concern that distemper and other viruses might be cross-transferable to Antarctic seals. sled dogs were frequently used in the far north, where vehicles would be impractical or even impossible to operate. Nowadays, dogsleds are largely considered an outdated form of transportation but are still used by indigenous peoples and in rural areas, and of course, during recreational dogsled races.

In fiction set in northern regions, however, dogsledding will often be depicted as the dominant form of transportation due to its "exotic" nature. Expect to hear fictional mushers shouting mush as they prompt their dogs into motion. The dog team is likely to be composed of spitz-type dogs, though a diverse variety of breeds have been historically developed for draught work. The Siberian Husky remains the quintessential sledding breed in popular media (especially in Russia), although the Alaskan Husky

— a non-standardized landrace bred solely for working ability — is preferred by actual North American mushers. Wolf-dog hybrids are also a popular choice in fiction, despite the fact they would make terrible working dogs in real life.

Other breeds, such as the Alaskan Malamute, Chinook, and Greenland Dog, are rarely depicted in fiction, if at all.

Such an adventure is a good way to show off an Heroic Dog.