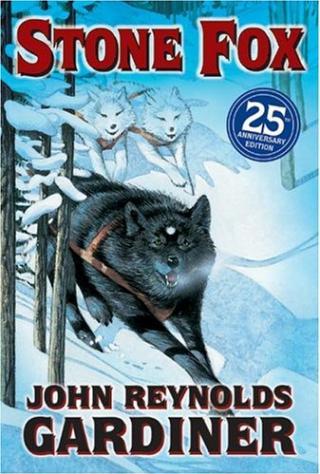 If there was a holy trinity of Anvilicious Death by Newbery Medal children's literature, it would be Bridge to Terabithia, Where the Red Fern Grows, and... this book.

Little Willy and his dog Searchlight live in Wyoming, and Little Willy's grandfather, though otherwise perfectly healthy, has come down with a bad case of losing-his-will-to-live. The reason? He owes the state $500 in taxes, and they're threatening to take away his farm. So Little Willy and Searchlight, despite having absolutely no training, decide to sign up for a sled dog race with $500 dollars as the prize money. Their main competitor is Stone Fox, a Native American man who never ever talks to white people and has never lost a race with his trusty Samoyeds. Little Willy and Searchlight place all their hopes of saving Grandpa's farm on the race!

As the description suggests, this short novel (written in 1980 by John Reynolds Gardiner) is very much one of those books. It was, however, very popular. It's been read by millions of children (and assigned reading in many schools), and had a 1987 Made-for-TV Movie adaptation. Produced by Hanna-Barbera, no less.