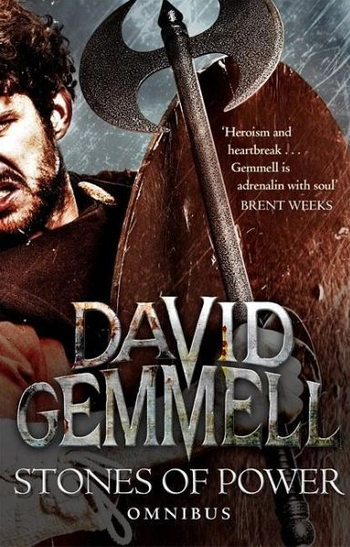 The Stones of Power series by David Gemmell consists of seven books set in three widely-separated time periods: two in Ancient Greece; two in Dark Age Europe, featuring the people who became mythologised as King Arthur and his knights; and three featuring The Gunslinger Jon Shannow in a Wild West-style post-apocalypse wasteland.
Advertisement:

There's also Time Travel involved, mixing in a couple of other time periods, including The Present Day and the golden age of Atlantis (where all the trouble started); there's even a character for whom the events of the Jon Shannow novels occur before those of the Arthurian ones.

What ties all the stories together is the Sipstrassi, or Stones of Power, magical rocks that can be used to perform a wide variety of amazing things, for good or ill. They originated in Atlantis, and after its fall spread out across the world.