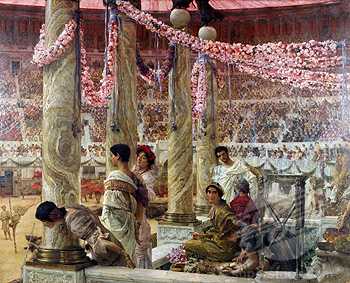 "Da Qin [Rome] has more than four hundred smaller cities and towns. It extends several thousand li in all directions. The king has his capital close to the mouth of a river. [...] The ruler of this country is not permanent. When disasters result from unusual phenomena, they unceremoniously replace him, installing a virtuous man as king, and release the old king, who does not dare show resentment. The common people are tall and virtuous like the Chinese, but wear hu [Western] clothes. [...] There are no bandits or thieves, but there are fierce tigers and lions that kill those travelling on the route. If you are not in a group, you cannot get through."
— Gan Ying, prospective Chinese ambassador to Romenote He turned back after reaching the Mediterranean, having been warned that the crossing was dangerous, c. 97 A.D., providing a fanciful account based on stories from Parthian sailors.
Advertisement:

Home of temples with even bigger columns, and brutal sword-wielding Roman legionaries, all of whom had extremely clean, well-kept, elaborate armour and helmets (even down to the lowliest grunt soldier). Also home to gladiators, mad emperors and elaborately coiffed women with slinky, see-thru stolas. A time when Classical Mythology was Serious Business for the pious. Expect to see a lion eating a Christian or two.

The Roman Republic is less often depicted in fiction, except for the bit right at the end from Julius Caesar's conquests in the Gauls, affair with Cleopatra VII and assassination to the transition into The Roman Empire by Augustus (although occasionally you will see fiction set against the earlier struggle with Carthage or, more often, the slave revolt of Spartacus). The even earlier Roman Kingdom

is all but forgotten aside from the founding myth of Romulus and Remus. It's also pretty rare to see any fictional works set in the Western Roman Empire or the Eastern Roman Empire of Late Antiquity, which later evolved into the Byzantine Empire in The Middle Ages.

Roman architecture featured much more bricks than marble, but in the intervening centuries most of the bricks either crumbled, collapsed or were just stolen to make other buildings while those useless marble blocks and columns were left pretty much alone, so in Hollywood movies you're now treated to the sight of Imperial Rome made of shiny, gleaming travertino marble, with little or no brick houses to be seen.

Works set in this time period: