Literature / A Taste of Honey 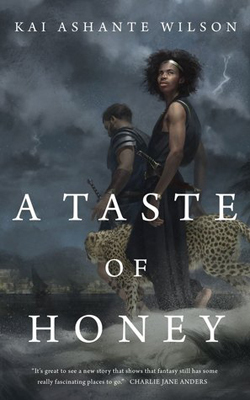 From the wall's far side there came a faint call, Ego te amo.
Advertisement:

A Taste of Honey, published in 2016, is a novella by American author Kai Ashante Wilson. It is a Science Fantasy story set in a fantasy equivalent of Ancient Africa.

It tells the love story of Aqib bgm Sadiqi, the youngest son of the Master of Beasts and the Hunt from Olorum, and the Daluçan soldier Lucrio Cordius de Besberibus, who is in Olorum as part of an embassy mission between their two nations. Neither Aqib's father nor his brother are too keen on him engaging in what is known as the sin of Daluz, especially as Aqib is set to inherit his father's title and the Menagerie thanks to his affinity to animals, but Aqib is head over heels in love with Lucrio. While their respective nobles and gods negotiate treaties, Aqib and Lucrio do their best to forget that the embassy is bound to depart homeward within ten days.

The story is told in an Anachronic Order where the ten days Aqib spends with Lucrio are interspersed with scenes from his future life where he has let the opportunity to return with Lucrio to Daluz slide in favor of his duty to his family, and has married the Olorumi king's daughter instead, advancing his family's standing considerably. This story arc deals with how his wife, the Blessèd Femysade, turns out to be a scientific savant and is invited by the gods to join them in their quest to become light, leaving Aqib and their daughter Lucretia behind.

The novella The Sorcerer of the Wildeeps is set in the same world, though likely much later in its internal continuity.

A Taste of Honey provides examples of: