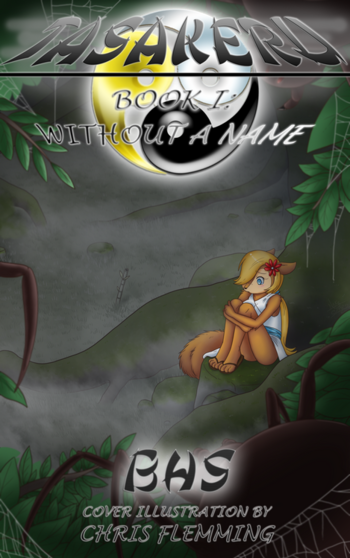 A place where the giant spiders are the least of your problems.
Somewhere far away, on another Earth, devoid of humankind......
— from the Introduction
Advertisement:

Somewhere far away, there exists another Earth… a parallel reality to our own where man has never existed, but animals speak, think, and act like us. Anthropomorphic, but not fully human and not fully animal, they emulate the best and worst of mankind without ever being aware of it. This is the story of a group of exiles trying to survive, a noble but flawed civilization constantly teetering on the edge of chaos, and a world that will need the very outcasts it has rejected to save it from destruction. This is TASAKERU.

is an ongoing series written by BHS. Planned as a series of 24 short books, the series aims to use animal characters to reflect on human nature. Think "Redwall, but grown-up", or Zootopia as a young adult High / Heroic Fantasy.

A relaunch of the series is in progress as of April 2015.

Now has a character sheet, still in progress.

In mid-2019, the series partnered with Amazon, leaving only the first 3 chapters of each book online.

Tasakeru is currently undergoing a relaunch and major revisions. As such, the information on this page may be outdated or inaccurate. Until the revised chapters are posted, please excuse any discrepancies or contradictions.