Weakness Turns Her On 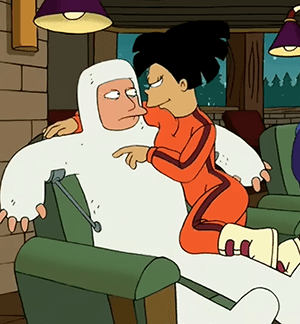 To her, he really does look better that way.
"I heard Yugi had lost his will to live. That is such a turn-on for me; I just love broken men."
— Mai Valentine, Yu-Gi-Oh! The Abridged Series
Advertisement:

A woman who finds weakness or submissive behavior inherently attractive and a turn-on. Some women find that having the dominant position in a relationship (pun possibly intended) is a turn-on, as the "power" is theirs and can be quite addictive. Also the healing that she's eager to give can lead to them falling in love with each other, creating the Florence Nightingale Effect, her dream come true.

To fit this trope, the desired or fetishized man must be seen as "weak," either in temperament or body (or both).

Compare and contrast All Girls Want Bad Boys, which shares similarities to this trope except that personality failings and anti-social behaviour as/rather than weaknesses are what attracts the woman to the man. Endearingly Dorky might come into play if social awkwardness or a similar trait overlaps with perceived weakness. See also Beastess and Amazonian Beauty, for the type of woman whom an Amazon Chaser in this scenario is likely to be attracted to. Also compare Power Dynamics Kink.