I Love You Because I Can't Control You 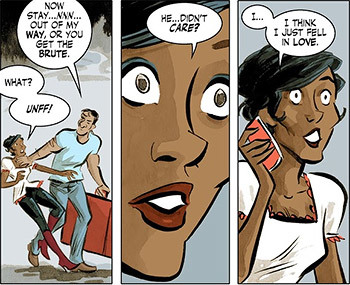 "You are a hateful woman. You oppose me to the very end. But I shall forgive you. Some things are beautiful because they cannot be obtained."
— Gilgamesh, Fate/stay night
Advertisement:

A person who, by intense charisma, magic, science, or mundane methods of seduction, is able to make everyone throw themselves at their feet; absolutely anyone they want. Then they find a true challenge when they meet another character who, for whatever reason, is immune to their charms. In other words, this person has the power to choose the seducer of their own free will, and love them for who they are on the inside. Forbidden Fruit is also a factor since something unattainable is naturally more desirable.

If The Casanova gets a Love Interest, he will often fall for her because of this trope. This is often an explanation behind Ladykiller in Love and implied in The Love Slap of Epiphany. Contrast All Take and No Give. Sub-Trope of Somebody Doesn't Love Raymond, Forbidden Fruit and No Challenge Equals No Satisfaction. When the uncontrollable object is not flattered by the attention, she may be dealing with a Prince Charming Wannabe. Also compare Power Dynamics Kink and Rejection Affection.

Book dumb chick magnet Drake Parker finds himself drawn to the brilliant Michelle who requires more than his usual simple, lazy charm and jokes to be impressed.

Book dumb chick magnet Drake Parker finds himself drawn to the brilliant Michelle who requires more than his usual simple, lazy charm and jokes to be impressed.