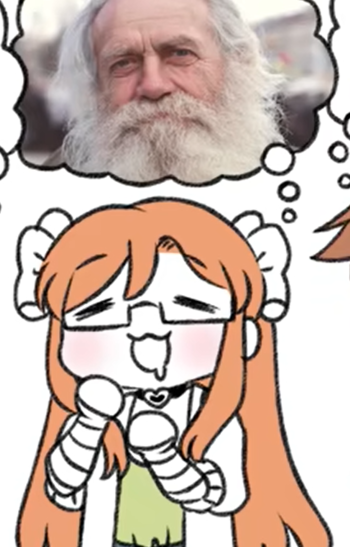 The Distaff Counterpart to Likes Older Women. This is a (usually female) character who, for one reason or another, vastly prefers her male Love Interests to be a few years older than her. The reasons could vary from a character looking for emotional stability, the responsibility that comes with maturity, to the character simply liking the Perma-Stubble look.

As with Likes Older Women, this is an Evolving Trope: For much of western society's history, it was common for a man to only get married when he was financially stable, while his bride was likely to be teenage. Nowadays such a union would be seen as odd, to say the least.

Examples of characters going after older women go on Likes Older Women. Remember, in order to be this trope the preference needs to be commented on in-universe or made apparent by repeated infatuation with older men. If the character only likes a man who happens to be (much) older, it's just an Age-Gap Romance, but if they state his age as a reason why they were interested, or they consistently go after men well above their age, then it's this trope. If they are only interested in the man because of his money they might be a Gold Digger. In order to qualify for this trope, the man has to be older than the character by at least five years.

This trope is also common in Queer Media, revolving with tropes such as The Bear and Lover and Beloved.