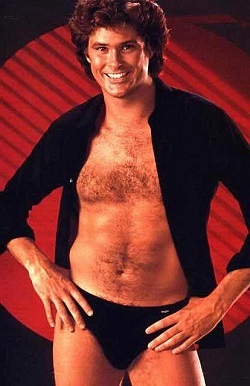 "Describe David Hasselhoff here?" The Hoff needs no explanation. He simply is. But if you insist...

David Michael Hasselhoff (born July 17, 1952 in Baltimore, Maryland) is an American actor and musician best known for his roles on Knight Rider and Baywatch. An icon of The '80s, his good looks and macho aesthetic made him one of the most popular actors of his day. His music career achieved similar success, with his third album "Looking For Freedom" becoming an international chart-topper and going triple-platinum in Europe. Though his golden age may have passed, the 80's live on in him.

Also worth noting is that he was Nick Fury long before Samuel L. Jackson, starring as the character in the 1998 Made-for-TV Movie Nick Fury: Agent of S.H.I.E.L.D. Perhaps as a nod to this, Marvel Studios gave him a cameo in Guardians of the Galaxy Vol. 2, for which he also recorded the end credits song "Guardians Inferno".

Oh, and Germans love him. Really