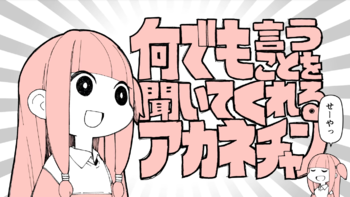 "Nandemo Iukoto Wo Kiite Kureru Akane-Chan." (何でも言うことを聞いてくれるアカネチャン, lit. "Akane-chan who will listen to whatever you say"note Alternatively translated as "Akane-chan will listen to whatever you say"), also known as "Seyana", is a Vocaloid / Voiceroidnote Vocaloid is singing software, while Voiceroid focuses more on simple text-to-speech. song and music video produced by Gyari-P. It was posted to Nico Nico Douga (here

Yukari Yuzuki gets the idea to become a famous video game streamer, and details her plans to stream a particular gamenote implied to be Player Unknowns Battlegrounds, with her friend Akane Kotonoha simply saying "yes" to every step and appearing to support her. Unfortunately, things don't go exactly as planned...