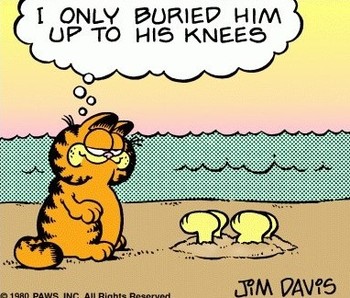 And he let you?
General Chang: You'll never take this city while I'm alive, monster!
The Death Knight: Terms accepted. [stab]
— The Order of the Stick, "Flew the Coop"

When the exact wording of a rule, promise, prophecy, etc. matters more than the spirit of the wording, it's an Exact Words situation.

The Knight Templar, the Anti-Hero, and those with even looser standards (but some standards) will often stick to Exact Words even as they declare I Gave My Word. A common trait of Lawful Evil characters. Also a common (and not always evil) way to play with Just Following Orders or the Leonine Contract. Undercover heroes often tell the Big Bad that "Your operation is very impressive, and you deserve everything that's coming to you" — both of which are true, without specifying what exactly is coming their way. Often, a user of Exact Words will parrot the specific wording of the agreement, smugly or matter-of-factly, when confronted about their duplicity, in order to taunt the other person or point out that they technically didn't lie.

For magical enforcement, see Literal Genie. Often the cause of Prophecy Twist. Literal-Minded characters just do it because that's how they think. Can be defended against with Legalese, though might be used (and horribly abused) by a Rules Lawyer. If someone follows established rules to annoy someone else, it becomes Bothering by the Book. If this trope is related to or defines a superpower, it's called a Semantic Superpower.

In the case of prophecies and prophecy twists, Fridge Logic kicks in, leading one to wonder what the heck the prophet actually saw, and why would the prophet word it as such?

Subtrope of Double Meaning. Compare Heroic Vow, I Would Say If I Could Say and Ironic Echo. Unhand Them, Villain! is a specific variant. Threat Backfire is a common result. It's very commonly used in False Reassurance. The actual interpretation of the words is often Not Hyperbole. When used in response to a question can often result in a Mathematician's Answer. Can also lead to a Literal Metaphor, Literal Money Metaphor and to Literalist Snarking, as well as Loophole Abuse. Also see No Man of Woman Born. Contrast with I Lied, for when the opposing party makes no effort to hide the fact that they were not holding to their end. Not to be confused with Literal-Minded. Often a very important part of the Comically Wordy Contract, but easy to overlook because the contract is so damned wordy.

In Real Life doing this with instructions (for example, in your workplace), is called "malicious compliance" or "working to rule." It's a form of striking often used by health care workers and others in industries where refusing to work would put lives at risk. Instructions have to be painstakingly worded such that someone who has no idea what they are doing can complete the task reasonably well. If an experienced worker decides to follow every detail of every instruction, work grinds to almost a halt. But of course, since you've technically complied with all instructions the company can't fire you for incompetance or insubordination. The Exact Words are also the difference between a riddle and a mere common question.

The Professor Must Pay

The girls failed Him's challenge and now the Professor must pay...

The Professor Must Pay

The girls failed Him's challenge and now the Professor must pay...