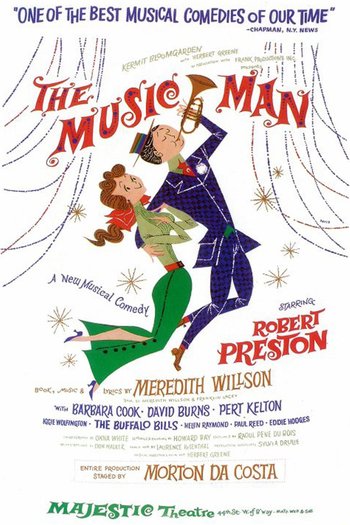 "So what the heck
You're welcome
Join us at the picnic
You can eat your fill
Of all the food you bring yourself.
You really ought to give
Iowa
A try."
— River City Citizens, "Iowa Stubborn"
Advertisement:

This page has tropes with a capital T, and that rhymes with "D", and that stands for "Describe The Music Man Here!"

The Music Man is a Tony Award-winning 1957 musical comedy written by Meredith Willson. Long regarded as one of the classics of the genre, it has been a staple of Summer Stock, High School, and Community theatre productions for more than 50 years.

The story involves an itinerant Con Man rolling into a small town in Iowa, where the people are generally staunch and cynical of any stranger. Using his charm, "Professor" Harold Hill introduces himself as a music teacher, come to organize the easily corrupted youth of the town into a band to keep them out of trouble. Hill's plan is basically to charge the townspeople through the roof for band instruments and uniforms, then run off when the time comes to actually make good on his offer. Unfortunately for him, he starts to get too into the role and gains an attraction to the feisty and independent Marian, the local librarian, who is quick to see through his deception.

Set in 1912, The Music Man misses The Gay '90s, but not by much, and demonstrates the same nostalgic treatment, while (at least in the film version) lampshading it.

The original Broadway production starred Robert Preston as Harold Hill and Barbara Cook as Marian. Preston reprised his role for the 1962 film adaptation, which costarred Shirley Jones as Marian and a very young Ron Howard as Marian's little brother Winthrop. The film was produced and directed by Morton DaCosta, who'd also directed the original Broadway show, and is more faithful to the show than most musical film adaptations of the era. It was adapted again as a 2003 Wonderful World of Disney remake starring Matthew Broderick and Kristin Chenoweth. There have been revivals too on Broadway (some of them were in 1981 and in 2000 and an upcoming one in 2022).

Tropes with a capital "T" and that rhymes with "P" and that stands for "pool!":