Take It to the Bridge 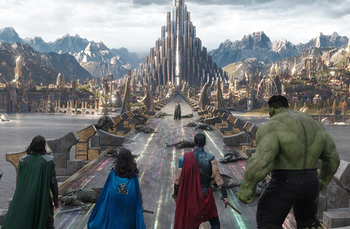 They didn't really have a plan to stop Hela, they were just going to cross that bridge when they got to it.
"You'll all turn to dust, but one thing is sure, boys: Branston Bridge will stand unbroken."
— Union Captain, The Good, the Bad and the Ugly
Advertisement:

Bridges are seen as symbols for the crossroads of life, so therefore, it can also be the setting for an important plot point.

Bridges are often used as meeting places, places for swaps, etc., anything relative to the plot. This is sometimes done when they form the border between two territories. They can also serve as the only connection for the isolated region to the mainland. Reaching it may put you in Liminal Time.

It can also be a battlefield for two men in a duel, with the loser falling to their doom. In this scenario, underneath the bridge is a chasm, some rapids, a pit of spikes, or anything deadly. When the bridge itself is hazardous, that's Rope Bridge; when it's guarded, it's a Troll Bridge. No connection to trope The Bridge, which is about the bridge on a ship.

Unlike the misleading title, this may not always involve James Brown... or Justin Timberlake. Or that confounded Zeppelin.

The Five fight Tai Lung on a bridge.

The Five fight Tai Lung on a bridge.