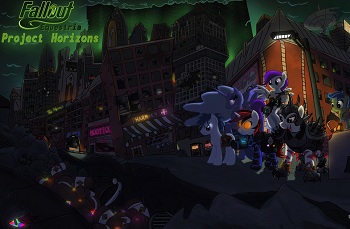 is a Recursive Fanfiction for Fallout: Equestria by Somber.

Stable 99 is an okay place to live. Sure, the place has seen better days, but the poor mares down in maintenance can't be blamed for the lack of upkeep. After all, the stable's been running on recycled parts for two hundred years, and a lot of important stuff got broken in the Incident. And the bucks might complain about the lack of freedom compared to the mares, but why bother? All they have to do is get laid all day. Until they get retired, that is, but don't think about that. And yeah, the mares might not have much freedom either, but you can't take any chances, especially after what happened last time...

Okay, maybe it's not the best place to live, but at least it's better than being outside. After all, with the door broken, there's no chance that somepony might get in and cause problems. It would take somepony with knowledge of how the stable works to get that thing open. Even then, how would they know it's safe? There was a war, remember? Better to just wait for the Overmare to say it's okay than take chances, even if she does have an ego problem. Just don't think about it, okay?

It goes without saying that things get worse. The door gets opened and a band of murderous, cannibalistic raiders immediately swarms in. Before the death count can get too high though, Blackjack, worst security mare in the stable, lures them out with a mysterious data file stashed on her PipBuck. With a cybernetic monster on her heels and a reluctant companion at her side, she sets out into the Equestrian Wasteland, determined to discover exactly what those raiders wanted so badly. After some hard lessons, it isn't long before the troubled mare finds herself delving through the dark secrets of wartime Equestria, and engulfed in a plot that threatens far more than just Stable 99...

And Hoofington is pretty much the worst place in Equestria to live.

Due to the story's great length, it has been split into five volumes which each encompass a primary story arc.

The story was completed on August 29th 2015, four years after it was started.

The Character sheet for is here. Due to the large cast, it needs a lot of love.

It is also available in PDF format here.

was released on November 14th, 2015, and is currently ongoing.