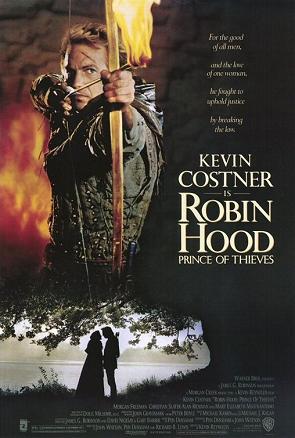 Don't tell me, "It's not worth trying for,"
You can't tell me, "It's not worth dying for,"
"I've seen knights in armour panic at the first hint of battle. And I've seen the lowliest unarmed squire pull a spear from his own body, to defend a dying horse. Nobility is not a birthright; it's defined by one's actions."
—Robin of Locksley
Advertisement:

Robin Hood: Prince of Thieves is a 1991 period-ish action-adventure movie based on the Robin Hood myth, directed by Kevin Reynolds and starring Kevin Costner in the title role.

The story is familiar; Robin, a Crusader, escapes Jerusalem alongside a Muslim named Azeem (Morgan Freeman), and they return to England. They discover that Robin's father (BRIAN BLESSED) has been killed by the Sheriff of Nottingham (Alan Rickman), who is also now apparently a devil worshipper and is assisted in his evildoing by his cousin, Guy of Gisborne (Michael Wincott). Robin and Azeem become outlaws, and steal from the rich and give to the poor. Men are made merry, bucklers are swashed, and they all live Happily Ever After (except the Sheriff, obviously). It's also fairly dark compared to most Robin Hood adaptations.

The movie opened to decent reviews, was a box office success and was nominated for quite a few awards, including an Oscar. Noted for Kevin Costner Not Even Bothering with the Accent and Alan Rickman's gloriously hamtastic performance.

The Mel Brooks 1993 parody Robin Hood: Men in Tights largely lampoons this movie, although it acknowledges other elements of the legend.

No connection (other than subject matter) to to the 1948 adventure film The Prince of Thieves.