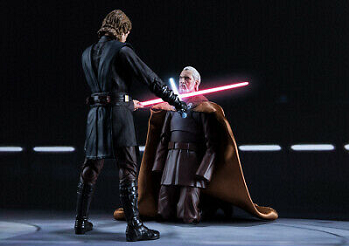 DO IT!
Zuko: I have you now! HIYA!
Zhao: Oh My God! Did you really just miss me point blank?!
Zuko: No, I, um... I did it on purpose so, um... let that be a lesson to you!
Zhao: Oh, so instead of being completely talentless you're just completely ball-less! Nice save there, Chief!
— Avatar: The Abridged Series
Advertisement:

A goodie has captured the baddie and is holding a sword over their head. They really hate this baddie. He or she has killed their friends or family!

There's a Dramatic Pause as the goodie mentally debates whether to kill the baddie. In the end, however, they will throw the sword away and let the bad guy be captured by the authorities (unless, of course, they're an Anti-Hero). Another variation has them throw the sword right next to the villain in a way that makes it clear that they could have killed them but didn't.

Alternately, if the hero simply sheathes the sword instead of actually discarding it, the baddie inevitably rises up one more time once the hero's back is turned, only to get struck down in a single dramatic stroke.

This trope can just as easily be done with firearms. Often by the hero firing a shot, only to have aimed away from villain at the last second.

Bystanders may be provided to say either "If You Kill Him, You Will Be Just Like Him!" or "Kill Him Already!"

If the roles are reversed and the villain has the hero at his mercy, it can go either way. If he chooses to spare the hero, we might be looking at I Need You Stronger. Otherwise he'll decide to finish the hero off, but be prepared for a Thwarted Coup de Grâce.

Warning note... there are plenty of spoilers here. Be ye warned.

Oh, and there are supposedly a few types of sword actually designed to strike the killing blow with an overhead strike that splits the target's skull. It doesn't have to be that literal to count as this trope.