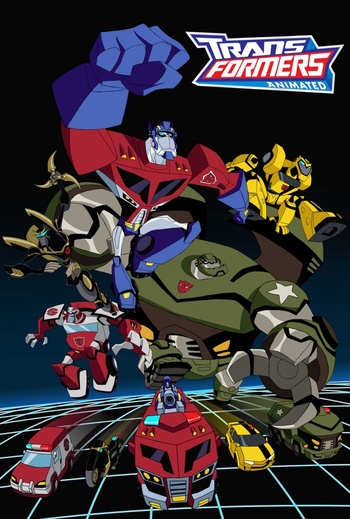 "Heroes are the ones who make the hard choices."
Bumblebee: But we're repair 'bots! We're not programmed for this kind of action!
Optimus Prime: Then consider this an upgrade!
Advertisement:

Debuting in December 2007 with a three-episode-long "pilot movie", Animated, despite being an Alternate Continuity, was created to ride the popularity of the 2007 Transformers film and, as a result, borrows several aspects of the film. Despite severe fan reactions to the character designs and animation style, the show's story and scripting (and a healthy respect to the saga as a whole) have won over many converts in short order.

A long time after the Decepticons were defeated in the Great War, a group of maintenance Autobots (Optimus Prime, Ratchet, Bulkhead, Prowl and Bumblebee) discover the coveted Transformer artifact called "The AllSpark". When they're attacked by the exiled Decepticons, their ship crash-lands on Earth in Detroit. Waking up in The Future, they befriend Sari Sumdac, 7-year-old daughter of Robotics genius Professor Isaac Sumdac, and work to maintain friendly relations with the public. However, the Decepticons aren't far behind.

One of the things that separate this show from its predecessors is the animation style, which is fluid, simplistic and very organic-looking. While some are still unhappy with the look, the simple style makes animation easier and gave some really stylistic action scenes; you can become accustomed to it surprisingly quickly.

Another distinction is the way the Decepticons are used. They are big and powerful enemies, and the Autobots are maintenance workers (In fact, most of their weapons are re-purposed tools); even one 'Con requires the entire small Autobot team to work together just to contain him. Most of the time, Megatron is planning some sort of Evil Plan to avoid detection while still furthering his plans. He is dangerous, but the Decepticons as a whole are a scattered group; Megatron doesn't want to deal with the entire Autobot Elite Guard before he's ready. Additionally, the Decepticons mostly consider themselves freedom fighters against a corrupt and unfair caste system with the Autobots firmly at the top. The viewers are encouraged to see the predjudice that has arisen in Cybertronian society but can also see that Your Terrorists Are Our Freedom Fighters.

To maintain the Decepticons as serious enemies, humans comprise the bulk of the Autobots' enemies for the first two seasons. Some are joke villains who are only petty thieves, but others are legitimate threats to the Autobots. Other unique features of the show are that the Transformers are very well-known among the community (which hasn't really been done since Generation 1), and there is a noticeable lack of Hero Insurance. The humans are unhappy with the collateral damage, and the Autobots maintain their good graces by repairing the city. (After all, they are construction workers.)

The show lasted three seasons and although somewhat cut short on production plans (they were hoping for a fourth season) the last episode was written to serve as a respectable Grand Finale, concluding the overall Myth Arc. Hasbro partnered with Discovery Communications to launch the Hub, the home of the next Transformers series, Prime Cartoon Network stopped airing the show almost as soon as the finale aired. Plans for Season 4 involved helping Sari gain more development, as Executive Meddling from Hasbro demoted her to a secondary recurring character in Season 3.

The show overall received positive reviews for storytelling and dynamic characterization which Revenge of The Fallen was chastised for lacking, but initally suffered criticism for its initial art style which was pecieved as a step in the wrong direction. This criticism faded quickly once the show began properly and has since been praised as a highlight. The show has gone on to become a beloved fandom darling; even more than a decade after its pre-emptive finale, many fans continue to call for a Young Justice style resurrection. It's influence also looms large on later incarnations; in particular, it's original characters Bulkhead, Lugnut, Lockdown, and Slipstream enjoy such popularity that they became part of the larger recurring character roster the franchise pulls from.

However, the series got a brief revival/continuation via the Official Fanclub and its Timelines imprint, with an exclusive toyset designed by the series' art director and a comic penned by the series' main writer, and said writer has expressed a desire to continue Season 4 via comics if any publisher is willing. In addition, the Hub itself aired reruns of the series prior to its rebranding as Discovery Family. In 2019, story editor Marty Isenberg pieced together an illustrated outline reading of the Season 4 three-part opener, "Trial of Megatron", by the original voice actors when he was invited to the UK Transformers convention (which was prohibited from being recorded, but was uploaded to YouTube by the convention's channel in August 16, 2021).