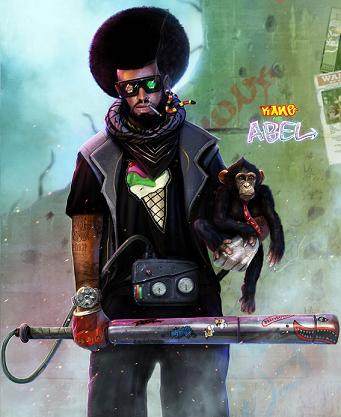 "Who is the man, that'll risk his neck for his brother man?? Shaft!! Right on."
— Isaac Hayes, "Theme from Shaft"
Advertisement:

All right! You've gotten your Ensemble Cast but something's missing. Something... funky. A character to provide kickass quotes to be tossed around the Internet. Apparently Samuel L. Jackson is interested in the project. Yes.

Enter Soul Brotha. This man is a badass. He is pure coolness. He speaks in a slang at once incomprehensible and utterly groovy, and he sho can groove. He usually is calm and laid back but he is nothing to play with; he doesn't tolerate disrespect and he never backs down from a fight, he can defend himself pretty well whether he has to defend himself physically or with weapons, most of the time he comes out the one winning the fight. If he dies (and he probably will) it will be in the coolest way imaginable. He may or may not have an afro, but he will certainly be Black. You can also expect this character to be The Casanova. It's rare the creators make this character faithful to one woman. Expect him to ask where all the white women are.

Most of the time this character is not the protagonist. He is usually the The Lancer and if not, you can expect him to be in part of a duo with a white guy who is not as nearly as cool as him. Sometimes this character is just a Token Black Friend to the protagonist, or a cool guy version of Uncle Tomfoolery. If he is the protagonist it's usually in a film or series which the cast is mostly black. These characters were most popular in The '70s, during the height of Blaxploitation. This character would also usually be American, or occasionally Jamaican.

According to this trope, Black men are somehow inherently cooler than their non Black neighbors. Part of this is the fact that most American music developed in the 20th Century has roots in the African-American community: Jazz, Blues, Soul, Hip-Hop, Funk, Rock & Roll, and yes, even Country Music. Although the aesthetic of cool itself has had a long history worldwide, the term "cool" itself was also first used by Black people.

See also Token Black Friend. One of the few roles where there isn't really a such thing as "too black".