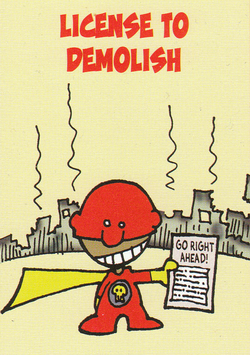 Valid only in New York City. If you wreck anything in Hoboken, you're on the hook for it.
"It's tough to do a good deed. Just look at your professional good deed doers. Your Lone Rangers, your Superman, your Batman, your Spider-Man, your Elasticman. They are all wearing disguises, masks over their faces. Secret identities. Don't want people to know who they are. It's too much aggravation. 'Superman, yeah thanks for saving my life, but did you have to come through my wall? I'm renting here, I've got a security deposit. What am I supposed to do?'"
— Jerry Seinfeld
Advertisement:

Heroes never get in trouble for plowing through buildings, demolishing half the city, killing seventeen people and injuring three, taking things that do not belong to them, or jaywalking, as long as they're being heroic. The necessary explanation seems to be that they've got very, very good insurance, that will take care of everything, including the costs of cleanup, repair, and presumably fat settlements for the people who want to sue the hero's spandex-clad bottom off. Of course, there's also the matter of Secret Identity: even if you wanted to sue Superman for damages, who exactly are you supposed to file your case against?

At worst, the hero will face an Arson, Murder, and Lifesaving speech at the end, but often there's not even that. Morality doesn't come into play, as the consequences of the hero's actions are all but ignored. This is why even The Cape can get away with gross negligence for the safety of innocent people; it's assumed that somehow, nobody will get hurt, and the property damage tab will gladly be picked up by someone else.

This trope often occurs with Hero with Bad Publicity, in that peoples' anger is wrongly directed at the hero, rather than at the villain who caused the trouble in the first place. Civilians who whine about rescues they don't like can often come across as Ungrateful Bastards when it doesn't seem to occur to them that they could end up enslaved, dead or worse if The Bad Guy Wins and the hero doesn't stop them.

This is sometimes handwaved with the heroes actually mentioning that they've got insurance that will cover this—and is actually a specific rule featured in the old Comics Code—but it's unclear how any insurance company could do this and still turn a profit. Logically, they shouldn't be able to pay for the on-panel destruction unless they are also collecting mammoth premiums from many other superheroes who don't make big claims. So whenever Superman punches through a wall, somewhere, a less-violent hero like Oracle sees her premiums go up? That money has to come from somewhere! Other times the handwave comes from the fact that the hero is a billionaire and could pay for the rebuilds.

This is a popular subject in the Deconstruction, where destructive heroes are often portrayed as not much better than the villains they're fighting. In less serious works, this trope can be lampshaded with Action Insurance Gag.

However, many countries do have laws in place that prevent someone from being held liable for damage caused while saving someone's life. In the USA they are known as Good Samaritan laws. Such laws probably wouldn't apply in some of the more extreme cases of "heroic" destructiveness but is likely an easy enough excuse in situations where the damage caused is minor or where the threat stopped is sufficiently important. However, in some cases like bank robberies and other types of theft, stopping the villain always ends up costing more than just writing off what was stolen.

At times, the Reset Button and Status Quo Is God will pay for most damages and unless Hilarity Sues and Plot Armor prevents this trope, heroes will never ever ever have to pay.

A subtrope of Saved by the Awesome. See also Never Say "Die", A-Team Firing, No Endor Holocaust. Compare Designated Hero, Wrongful Accusation Insurance, Pay Evil unto Evil, and Paying for the Action Scene. Contrast Hilarity Sues. A real concern for the Walking Disaster Area. Commonly subverted by having the rescued begin Complaining About Rescues They Don't Like.

Q is about to issue Bond his new car under the cover of a rental agency employee. He issues him a wide range of insurance waivers for things like collisions, fire, and property distruction.

Q is about to issue Bond his new car under the cover of a rental agency employee. He issues him a wide range of insurance waivers for things like collisions, fire, and property distruction.