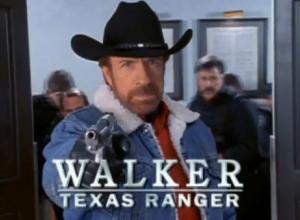 Cordell Walker isn't about to shoot you. He's allowing the bullet to fly into you.

Subject to much Memetic Mutation in the 2000s. This is thanks, at least partially, to Conan O'Brien, who used to play unintentionally humorous clips from the series on his show by way of the "Walker Texas Ranger Lever". As well as the general Memetic Badassery of Chuck Norris.

On September 23, 2019 it was announced that a reboot was in development

produced by and starring Jared Padalecki.

When the eyes of the Ranger are upon you
Any wrong you do he's gonna see
When you're in Texas, look behind you
...'Cause that's where the Ranger's gonna be.