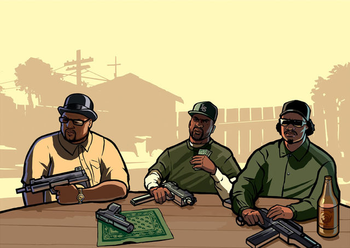 Hangin', chillin' and a fair bit of killin'.
"I keep ya weak! Comin' from the streets of the ghetto,
At the end of the week, I get to keep your dinero!
You're fast asleep when I sneak in your casa.
Now you're bankrupt, your life sucks and I'm laughin'.
You can't trust me, ese, because I'm Latin!
I don't care if you don't like me, everybody wanna fight me."
— One of the verses of Can You Feel The Heat, known to WWE fans as Eddie Guerrero's heel theme
Advertisement:

The Mafia... FROM THE STREETS!

Members of a youth street-gang whose behavior usually involves various criminal activities, including drug dealing, killing members of other groups, and vandalizing buildings by painting graffiti tags. May or may not commit rapes note despite the other meaning of banging gangs, as usually members of youth gangs have little trouble getting girlfriends who like the excitement and danger, some of whom are in girl gangs and killing their competitors too.

Gangbangers often fill the same role as The Mafia, but fit into a different archetype. Gangbangers are usually poor criminals, disorganized mobs who patrol ghettos, selling crack and getting into fights with rival gangs just for the hell of it, whereas Mafias are professionalized, very wealthy, diplomatic, often have connections to "legitimate" authorities, and more likely to plan assassinations and ambushes than just go around getting into fights for no reason. The two can overlap, but the distinctive dress will usually make the difference clear; Mafiosi wear suits, ties, sunglasses and (if period-appropriate) fedoras, while gangbangers tend to wear bandanas (on their heads, around their faces, around their legs, in their rear pockets, or some combination of the four), baseball caps or beanies, wifebeaters (some will instead opt for hoodies, flannel shirts, American sports jerseys, or tall tees), baggy jeans with varying amounts of damage, and either Timberland boots or sneakers.

Levels of organization and professionalism can often vary, and frequently do in more realistic works; gangs often run the gamut from reasonably well-run organizations who at least make a show of protecting the neighborhood and doing what they don't trust the police and city to do (and often are pretty serious about it), all the way to Stupid Evil ragtag bands of idiots who care way more about killing people, acting on and cultivating beefs, selling hard drugs and firearms to anyone who wants them with no regard for the consequences, and committing low-yield, high-visibility crimes just because it's the thug life.

The Irish Mob can be either depicted as period-appropriate gangbangers or as a kind of Mafia (though don't ever call them that), depending on time period, location, and the creator's opinions. For instance, the Irish gangs (and all the other gangs, for that matter) in Gangs of New York were the 19th-century equivalent of today's Bloods and Crips (they did wear top hats, but toppers were not considered highbrow in the 19th century and in fact carried the opposite connotation). The Irish Mob in The Departed, however, was much more Mafia-like.

Mafias will typically be composed of Italians, Jews, Russians (or some other post-Soviet Ethnic nationality), or occasionally Chinese, Japanese or British, whereas as the street gang is made up of African-Americans and Mestizo Hispanics—or more recently, poor Asian-Americans (typically Filipinos and/or Hmong)—with Unfortunate Implications all around (although American producers can be forgiven, as this is often Truth in Television for the most infamous gangs, especially since an all-white gang fitting this description would almost certainly be labeled as Skinheads or something similar instead). May occasionally overlap with Biker gangs, though they usually fall into their own category.

As a nod to the lack of precision or training, they will typically use their weapons Gangsta Style. White Gangbangers is what happens when the Unfortunate Implications are avoided intentionally, though often unrealistically (unless it's a white country with white gangbangers, like Russia—the Russian ones are called gopniki, singular gopnik, by the way).

Gangs separate themselves from each other with identifiers such as different coloured clothes and gang tattoos, which in extreme cases may make them a Gang of Hats. Often come from the Wrong Side of the Tracks. This is the alternative for most students in Save Our Students plots. Also a key component of the Hood Film.